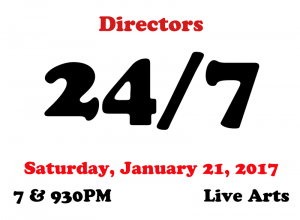 The directors of 24/7 are often the unsung heroes — unsung, even in a musical.  (that’s right, you never know what you’re gonna get in 24/7 – someone might write a musical overnight).

Directors get a random script and random cast and have to make it work.  And they do.  Oh to the yeah.  Year after year.

24/7 is Jan 21, 2017.  Nothing will be written until 24 hours before that.  Then the directors read their script for the first time Saturday morning.  Then the fun, action packed day begins – cast, designers, staging, timing, costumes, set, tech, all in one day.

This year we are honored to have the following great line up of 24/7 directors:

A few things to mention: