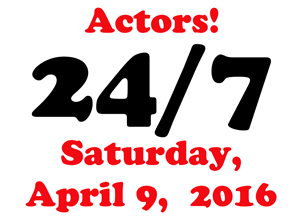 I think there’s a sign outside of 24/7 this year that reads, “you must be THIS TALENTED to ride this ride.”  Because — look at this list of actors — I would cast any of these over-talented clowns in anything.

And, I guess that makes sense.  Here they are, throwing their hats in the ring to be cast in, well… just about anything.

And, yes, they’re all freakishly tall… I mean, talented.

Plus, are there a few surprises up our sleeves?  Maybe.